Please note due to Coronavirus we are unable to ship the orders out until lockdown is no longer in place. Thank you for your understanding. Love Joanie

Japanese Lucky Cat / Maneki Neko
The Japanese Lucky Cat is one of my favourite items and has become very popular with my customers. Many people have been wondering where they originated and what's so special about them, so I thought i'd share some of the insights and history into our favourite cat which I hope you enjoy.

The Lucky Cat isn't just a recent craze as they were created during the Edo period (1603-1867) in Japan, and began getting popular at the beginning of 20th century!
The Lucky Cat has also been linked to several Japanese Emperors as well as to Oda Nobunaga and samurai Ii Naotaka.  It is said that one day the luminary passed by a cat, which seemed to wave to him. Taking the cat's motion as a sign, the nobleman paused and went over to it.  Diverted from his journey, he soon realised that he had avoided a trap that had been laid for him just up ahead and since that time, cats have been considered wise and lucky spirits protecting people from dangers.  Many Japanese shrines and homes include the figurine of a cat with one paw upraised as if waving—hence the origin of Maneki Neko, often referred to as Kami Neko in reference to the cat's kami or spirit.

Legends and stories
Maneki Neko is the subject of a number of legends. Here are three of the most popular, explaining the cat's origins:
1.  The Gotokuji Temple Cat

This is perhaps the most popular. This story, which is thought to date back to the beginning of the Edo Period (1603 - 1867), tells of a local priest, who looked after the Gotoku-ji Temple in Tokyo and kept a cat. Despite his poverty, the priest often shared his limited food with his cat. One day, during a storm a samurai sheltering under a tree at the temple saw the priest's cat, apparently beckoning to him to come into the temple for shelter. Just as he approached the cat, a bolt of lightning hit the tree that he had been sheltering under, causing it to crash to the ground where he had previously been standing. Grateful to the cat that had saved his life, the wealthy samurai rewarded the temple with funding for its upkeep and adopted it as his family place of worship. When the cat died, it was honoured by being buried in a special cemetery and a statue was made in his likeness, thus initiating the image of the lucky cat we know today.

A courtesan named Usugumo, living in Yoshiwara, in eastern Tokyo, kept a cat, much beloved by her. One night, the cat began tugging at her kimono. No matter what she did, the cat persisted. The owner of the brothel saw this, and believing the cat bewitched, cut its head off. The cat's head then flew to the ceiling where it killed a snake, ready at any moment to strike. Usugumo was devastated by the death of her companion. To cheer her up, one of her customers made her a wooden likeness of her cat as a gift. This cat image then became popular as the Maneki Neko.
3.  The Old Woman


An old woman living in Imado (eastern Tokyo) was forced to sell her cat due to extreme poverty. Soon afterwards the cat appeared to her in a dream. The cat told her to make its image in clay. She did as instructed, and soon afterward sold the statue. She then made more, and people bought them as well. They were so popular she soon became prosperous and wealthy. 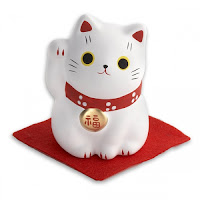 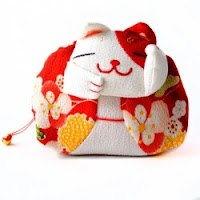 So I hope that explains a little bit about why JoaniesGifts are proud to be stocking such an array of historic Japanese Gifts.
Hopefully they will being good luck to you too x